When a race team features two 16-year-old drivers named Tyler, addressing them becomes a crucial aspect of team communication. That explains the nicknames.

"Mine is T-Gon, his is T-Max," Tyler Gonzalez said about the monikers used to distinguish him from teammate Tyler Maxson. "For short, it’s T.G. and T.M. most of the time. Together, everybody calls us T’n’T."

It’s not a bad problem to have. After two races this year in the IMSA Michelin Pilot Challenge, including last week’s Alan Jay Automotive Network 120 at Sebring International Raceway, Copeland Motorsports is planning a full season in the Pilot Challenge Touring Car (TCR) class in 2021.

Judging from the first effort – a runner-up finish in the series debut Oct. 16 at Michelin Raceway Road Atlanta – the full-season plan holds promise. Especially for two teenagers who love the car they’re driving.

"You feel every minute detail in the car," Maxson said of the team’s No. 27 Hyundai Veloster N TCR. "They developed this car in such a way that it gives all the power to the driver. It really is just incredible to drive this thing. It’s really fast, as it’s proven this year. It’s definitely a very, very fast car, and it’s really great for the drivers."

The idea to field a TCR team came from veteran racer Dean Copeland, whose success as a driver and owner in the Global Mazda MX-5 Cup Series led to the opportunity to expand. He already had two youngsters in his stable, and he knew they’d work well together at a higher level.

"The main thing with both of these kids is they both like the same characteristics in a race car," Copeland said. "It makes my job easy and makes for a winning duo. The seating position is the same, but they both like the car to handle the same. They have the same driving style – very fast, very up on the wheel. It’s hard to find two drivers with the same style in endurance racing. I’m lucky enough to have that going on.

At their Michelin Raceway debut, Gonzalez started sixth and worked the No. 27 Hyundai into contention. During Maxson’s stint, he took the lead late in the race before settling for a runner-up finish behind the No. 98 Bryan Herta Autosport with Curb Agajanian Hyundai co-driven by Michael Lewis and Mason Filippi.

Afterward, the two longtime teammates – the nicknames go back to their karting days – were informally addressed as T-Max and T-Gon

"That’s literally the only way we can differentiate ourselves," Maxson said with a laugh.

The nicknames are likely to last for a time. After finishing 10th in TCR in their second Pilot Challenge race at Sebring, Copeland Motorsports is looking ahead to the full season in 2021 with the two Tylers in the No. 27 car. Copeland also has a sister car planned for at least a part-time TCR schedule. And, with the Mazda MX-5 Cup moving under the IMSA umbrella in 2021, he’ll have his entire fleet of cars at the same tracks much of the time.

"We’ll be able to have all of our teams on site at one track at one time," said Copeland, whose shop is located in Stevensville, Maryland. "That’s exciting for us next year. … Our plan is to run two cars in TCR and have our MX-5 Cup program at the races, so we’ll have quite a few cars at the track. Hopefully, we’ll make a big splash in the IMSA paddock and have some success."

Both drivers started young, mastering go-karts at an early age and moving up to cars by the time they were 14. Before the move to Pilot Challenge late this season, Maxson won 11 races and the TCR championship in the TC America series driving a Veloster TCR N. Gonzalez, in a Veloster Turbo, won four races in the TCA category. IMSA’s minimum age for drivers is 17, but that can be reduced by one year at the discretion of IMSA officials based on previous experience in organized racing.

That experience in karting proved essential to their rapid ascension through the car ranks.

"It’s the same thing as riding a bike," Gonzalez said. "When you learn it when you’re young, you never really forget it. Just the race craft alone; there’s no such thing as karting race craft anywhere else."

"By the time those kids are 18 years old, they’re going to have two or three years of experience in the IMSA paddock," Copeland said. "If any manufacturers are looking for pro-level drivers, it’s hard to argue with an 18-year-old kid who’s been winning in IMSA for two-plus seasons already." 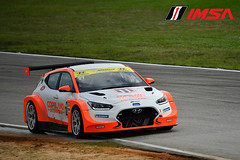 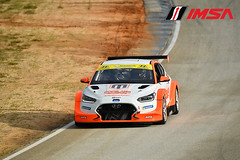 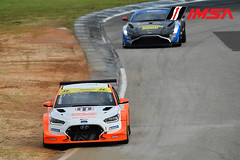 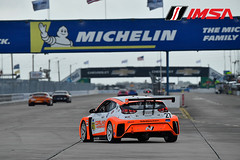 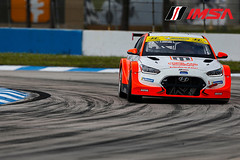